HomeBlogUncategorizedDoctor Pablo Casas receives the award for the best rhinoplasty surgeon in Spain, from the Minister of Health

Doctor Pablo Casas receives the award for the best rhinoplasty surgeon in Spain, from the Minister of Health

Doctor Pablo Casas receives the award for the best rhinoplasty surgeon in Spain, from the Minister of Health

This prestigious award was presented during the awards ceremony “A TU SALUD 2018” at the headquarters of the newspaper LA RAZÓN, together with some of the best doctors and surgeons in Spain.

This award has been given to him due to his great contribution in the world of RHINOPLASTY, since Doctor Pablo Casas has been a pioneer in Spain in introducing ultrasonic instruments in this surgery. At the present time, he is the surgeon with the most cases operated using the ULTRASONIC RHINOPLASTY technique, in Spain.

Ultrasonic rhinoplasty is the most advanced technique for this procedure. This method allows to reshape the nasal bones without breaking them, in a less traumatic way, since it does not damage the soft tissue or the blood vessels that cover the bone, reducing the patient’s swelling and bruising. It also allows a much greater precision in all the work on the bone of the nose that is performed in this surgery. In summary, it is a technique that provides numerous advantages both for the patient, in terms of recovery and the postoperative result, and also for the surgeon, in terms of the precision of his technique. 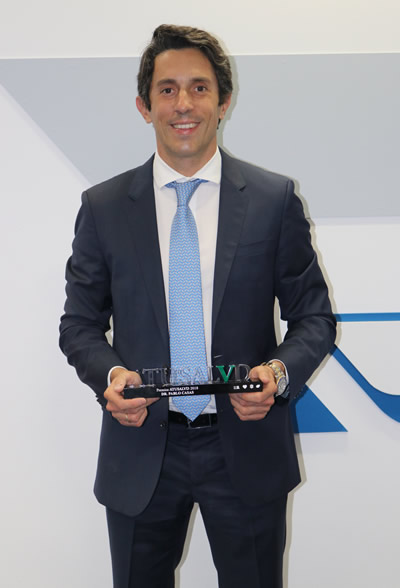 Dr. Casas says that he is proud to receive this award. “It is a prestigious award, and it is an acknowledgment of the hard work that I have carried out for years.”

The surgery of RHINOPLASTY, requires a great dedication and specialization. It is probably the most difficult cosmetic surgery. I have been dedicated to it for many years. This full dedication is essential to be able to offer patients the best results.

Because he is one of the few surgeons in Spain with double certification, in Otolaryngology and Facial Plastic Surgery, he receives patients for Rhinoplasty surgery that come from all over Spain and abroad. He has operated patients who have come from all the Autonomous Communities of Spain, and also from abroad, from countries such as Germany, France, England, Scotland, Holland, Belgium, Germany, United States, China, Peru, Ecuador, Colombia, Venezuela, and Argentina.

Dr. Pablo Casas obtained his degree in the Faculty of Medicine of the Complutense University of Madrid and his specialist degree in Otolaryngology and Head and Neck Surgery at the University Hospital La Paz in Madrid.

His interest in the field of Facial Plastic and Aesthetic Surgery took him to the United States, where he completed his training at the Memorial Sloan Kettering Center in New York and the University of Illinois at Chicago, where he also trained as a specialist in Facial Plastic Surgery and Reconstructive next to one of the best plastic surgeons in the world.

He is a delegate in Spain of the European Academy of Facial Plastic Surgery.

He is secretary of the Spanish Society of Facial Plastic Surgery.

Currently, he has an exclusively private practice focused 100% on rhinoplasty surgery, which he performes daily.

His future projects are to develop the least invasive techniques for the patient, allowing him to recover his usual activity as soon as possible, and at the same time offer the best possible results, both from the aesthetic and functional point of view.

He currently attends as a lecturer and professor at congresses at national and international level, and surgeons from other provinces and countries come to visit him to observe his technique. He is proud of being able to spread the ULTRASONIC RHINOPLASTY technique, since he considers that it is a technique with many advantages for the patient.

Give a Reply Cancel reply